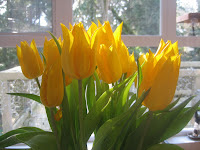 Flashback to June 12, 2005: It was four days before my first chemotherapy and the impending taste bud destruction. For my “Last Supper” I chose Lola, a modern Greek restaurant. That means you can get grilled octopus and dolmades, but you can also get high-tech martinis and wild Pacific prawns.

Our server was young and beautiful and her dark hair was rinsed cherry red. She cheerily explained the specials and asked if we had any questions. Having just had a mastectomy, all I could think was, “Have you had your mammogram?”

Instead I blurted out, “Of all the restaurants in Seattle, this is the one I chose for my last meal before chemo.”

She blinked for a few moments and then smiled and said, “I’m so glad you chose to come here.”

Since I was feeling like I was about to be sacrificed, I considered the lamb for my entrée. But I pushed away the dramatic mental images of my martyrdom and reminded myself, “Cancer is the enemy. Chemo is the defense.”

So I chose something I thought was symbolic of my new attitude: goat; cider braised with honeycrisp apples, roasted shallots, and celery salad. It was divine and I say that as an ordained minister and experienced foodie.

Our awareness that this was our last dinner out before six months of unknown chemo side-effects made every bite, sip, scent and sound sublime.

“This is the best dinner I’ve ever eaten,” I said holding hands across the table with Wes. He could only nod since his mouth was filled with chickpea fries, but I saw his eyes well up.

Our server came back to ask if we wanted dessert. “Just the check,” Wes answered.

She gave us a big smile and said, “You’re welcome to pay next time you come in. This one is on the house.”
We didn’t leave for another twenty minutes because we couldn’t stop crying.

So this December was our 22nd wedding anniversary and the next day was my two year end-of-chemo anniversary. “Let’s go to Lola!” I said to Wes.

I made the reservations and then, after a moment’s hesitation, told the hostess our experience from two years before. “I know it’s crazy,” I said. “But is she still there? She had cherry red hair.”

“Hold on.” I was on hold for a few moments and then someone picked up.

“I remember you,” the voice said.

It was her—Sabrina our server who is now a manager! We were coming in Friday night which is the only night she managed at Lola. Coincidence? I think not!

We were a party of six and Sabrina bought our appetizers and desserts. I gave her a copy of It's Not About the Hair. We ate, we drank, we laughed, gratitude flowing faster than wine. I ordered the goat and it was as delicious as I remembered.

Before we left I hugged Sabrina and said, “You just don’t know how many times I’ve told that story of my Last Supper.”

“I’ve told the story too!” she said. “I understand about the eating because my mom had chemo.”

She hesitated a moment. “She died—when I was little. But I still remember.”

I gave her another, longer hug. Clearly, in the few years they were together, her mother had taught her about love.

No wonder that night had felt like the Last Supper:

Do this in remembrance of me.

This was fantastic to read, Debra. I'm crying!

I am been reading the blogs these days!! Thank you for this.

Thanks for this story - a great moment of personal connection is what can seem like an impersonal world.

I am the daughter of a cancer survivor and you cannot imagine how instantly I could identify with what you've written. You've put if across so well..in your words I found expression to my feelings in your blog.

My mother was diagnosed with breast cancer 14 years ago and she took it very bravely. That made it so much easier for all of us. She is now cured of that since the detection was in a very early stage. But recently they discovered a larger malignancy in her ovaries. She'll now go through several rounds of chemotherapy, then surgery and some more chemotherapy again. She's as brave as ever through it all.

In anticipation of her loosing her hair (she looks at it as just a new hairstyle :)) and to give her company I've shaved my head as well. :P

I narrated the "Last Supper" episode to my mum last night and we both cried because we connected.