Proud To Be An American--At Last 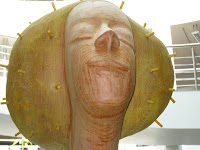 For the first time since I was a little kid, I feel proud to be an American. Seriously. Wes and I were in Europe a few years ago, just after the Iraq war started. Every time we showed our passports we said, “We didn’t vote for George Bush. We’re so sorry.”

Often I felt like lying and saying I was Canadian. I was so ashamed of my country.

But all that has changed now that Barack Obama is president elect. We stayed up Tuesday night and watched the returns and I wept and drank champagne. Yesterday morning I got up, read the paper and wept again. I was deeply moved and little hung over. 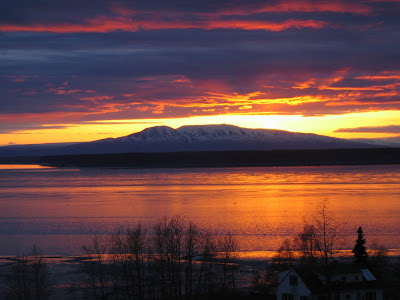 I think sunsets are miracles. And sunrises too. Even when it is cloudy in Seattle, the very fact that it gets lighter tells me the sun is out there somewhere and that seems miraculous to me. This particular pic was taken in Alaska, but sunsets are not what I want to talk about.

I want to talk about miracles and signs. Of course it's possible to read something into anything, but other times it is so clear. Here are two examples.

My 23 year old friend Charlie died a couple weeks ago. I had met him fifteen months ago when he came in for treatment of his recurrent Ewing's sarcoma. He had a face like an angel and was one of the sweetest most engaging young men I've ever met. He always asked, "How are you doing?"

He received lots of chemo and finally had a stem cell transplant. He was in a coma in the ICU when his father called me and said, "Deb, Charlie is dying. His heart is giving out. If you want to come say good-bye to him, that's okay. But don't come because of me. I'm fine. All this time it's pretty much been just me and Charlie and it's seems only right that it is just the two of us at the end."

I had already said good-bye and I love you to Charlie and I knew his dad wanted to be alone with him. So I went down to our little creek where there is a water fall. And I stood there with my hands out and prayed for Charlie. I said, "Charlie, I'm sending you the sound of this rippling, rushing water and I hope you can follow that sound and find your way out. Follow this clean, refreshing, renewing water and you will be okay." I stood there praying like that for about fifteen minutes.

I went back into house and the phone rang. It was Charlie's dad. "You're the second person I'm calling," he said. "Charlie died about fifteen minutes ago."

Through my tears I told him about praying for Charlie and he said, "Well, I believe it. He probably heard you."

You could say it was a coincidence, but it was a miracle to me. But there's more.

A couple days later I called to check in and see how Charlie's dad was doing. "I have amazing story to tell you," he said.

He explained how when Charlie got a recurrence fifteen months ago, his dog, a Husky ran away. "We looked all over for that dog," he said. "We drove around and posted signs and checked the animal shelters--no sign of him.

"So my wife and I came home after making all the funeral arrangements for Charlie. And who is sitting at the front gate? His Husky dog! Fifteen months later! And I knew that it was Charlie saying, 'Dad, I'm really okay. Don't worry about me.'" It was the ultimate comfort to him.

I just don't think you can say that was a coincidence. Well, I suppose you could but then I would worry about the kind of person you are.

Me--I live in a state of perpetual wonder.
Posted by Debra Jarvis at 11:58 AM 1 comment: 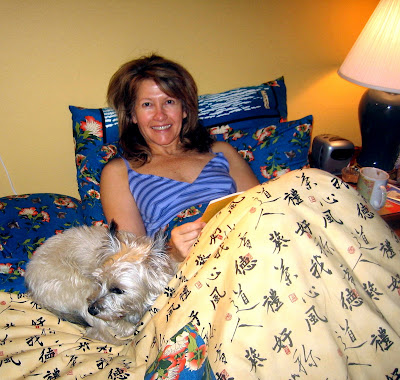 I feel as if I am recovering from an emotional/spiritual marathon. So this is my new morning routine: back to bed with a book, a latte and Max.

I'm definitely recovering but I found that just because I resigned from a job, didn't mean I could just resign from everyone's life. So in the three weeks after I officially left my staff position, I visited folks in the hospital and officiated at two funerals. In between that I tucked in a lecture and workshop in Denver. And a reading San Jose. And a reading in Seattle.

It's all glorious work, even the funerals--especially the funerals because I know how different it is to have an officiant who actually knew (and loved) the deceased. One of these people was a woman I visited the very first week I worked at the clinic. She was amazing and fun and I looked forward to seeing her every week. It's still hard for me to believe that she is dead.

I promised her years ago, that I would do her funeral and just because I was no longer officially working, didn't mean I would break a promise. After she died, another long-time patient died and then I felt as if all the loose ends were tied up. And last weekend was my last speaking engagement and I am grateful for that.

So Monday I went to a mandatory "Boundary Training" that is required of all UCC clergy. My initial attitude was quite whiney, "W-a-a-h, why do I have spend an entire day learning that I shouldn't sleep with parishioners. I already know that and besides, I don't even work in a church!"

But I decided to change my attitude precisely because I couldn't stand myself being such a brat for eight hours. Instead I said to myself, "There is something in this for me. I'll go into it expectant with my palms up and my hands outstretched." I think this is a pretty good way to go through just about anything because it changes your perspective immediately. Instead being petulant (which feels good for about ten seconds) I became curious, wondering what piece of wisdom I would bring home.

ANYway, the most important learning for me was that clergy are very good at running on imitation energy and we are very bad at saying, "No." They talked about how we can appear to be very energetic and present, but actually be completely empty inside. And how if we continue to do this, we are heading for destruction.

I so related to that. There were times when I was asked to see a patient and I just didn't have the energy but I would do it anyway. Because it's hard to turn down a nurse. Because this is my calling. Because I didn't want to ruin my reputation of being responsive. Because I'm a pleaser, etc.

But now I see how dangerous that was and how I was getting quite crumbly around the edges, like the last cookie in the bag. So now I'm in the recuperation phase, hence reading in bed with Max and a latte. What's even better is that Wes makes the latte for me.

I'm also happy to report that I've said no to two things that I really did not want to do. I was asked by two different agencies to do "The Ask" at their fundraiser luncheons. I hate asking for money. I really do. I really support both these agencies and even offered to be the keynote speaker at one. But in a very healthy and definite way, I absolutely refused.