Came and Fallow Me! 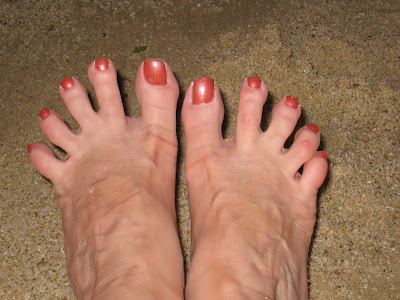 I can't explain why I can't stop doing it, but it feels so good that I don't really care.

Is it some premonition of my impending death? I say this because for the last 25 years whenever Wes was really late I started cleaning because I was sure the cops would be at my door to take me to the morgue at Harborview to identify his broken body and smashed up bike and then everyone would be arriving to comfort me which would be horrible, but at least I wouldn't have to worry about the house being dirty.

But I've been at this all week so I don't think it's that.

It could be because my sister arrives on Monday. But she's come here when this house was a pig sty. Seriously. She's been here when I had crap everywhere and was so disorganized that I could barely mumble an apology.

And yes, upon her arrival, we do play this game called "Mean Real Estate Lady." Because she has bought and sold more houses than I've ever lived in, she has vast experience with agents who inspect her house with an eye to selling it. (She is going through this now.)

So pretending to be the Mean Real Estate Lady, she walks around looking at my house and says stuff like, "What is this here for?" in a very critical voice. It could be something meaningful like the two carved wooden monks on the piano that my friend Claude willed to me. He died of AIDS and I treasure them because they remind me of our conversations about all things spiritual.

I have put the monks next to a Greek icon of the Virgin Mary holding the Baby Jesus. You know, keep the religions together. Because on the other side of the piano is the goddess Kuan Yin, a meditation bell and a Buddhist dorje. I think it's cool, but it might be the kind of thing that a prospective buyer finds hideous.

Or sometimes the Mean Real Estate Lady says things like, "Isn't this a little worn/stained/dated?" Or, "This is a bit cluttered, don't you think?"

If I get even a bit outraged, my sister says, "Hey, it's not me talking! It's the Mean Real Estate Lady."

But honestly, I don't think this is why I suddenly have all this energy for cleaning. I think it is because I am finally, very deeply rested. You know how you come home from work and you look at something and say to yourself, "Yeah, I really need to do that." But then you just can't do it, because you're tired. Deeply tired.

But I don't feel that way anymore! I have energy for all the cleaning and unfinished projects that have piled up in the last few years since me getting cancer and working as a chaplain.

I'm convinced I have this new found energy because in June I decided to spend the summer being fallow. I love this concept of letting a field lie unplanted to replenish it. If you take a superficial look at it, you might thnk, "Whatta waste! Something could be growing in that soil!" But actually, something is growing very deep within that soil that we can't see.

What did this mean for me? It meant that I wouldn't work on any new books or films, or audio documentaries or essays or commentaries, but instead would spend time taking in instead of putting out. I gave myself until September 1st.

And it has worked. But it was hell at first. Such guilt! Reading for hours? Sloth. Gardening all day, for days at a time? Indulgent. Drinking great wine when we're not having company? Hedonistic.

Gradually I got used to it. The most "work" I did was visiting hospice patients with Max. And because he's the main attraction, I'm off the hook.

I recommend this. You may not have the luxury of being able to be fallow for an entire season I like did. So try a weekend. A day. Or even a few hours.

Let me know how it goes.

And why I'm so driven in the first place? Well, that's for another post.
Posted by Debra Jarvis at 5:24 PM 3 comments: