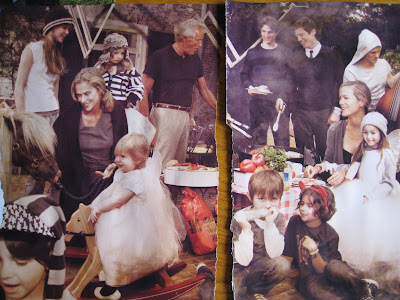 As matriarch, we have the still attractive Lauren Hutton, she of the gap-toothed smile. Her clothes say what she’s thinking, “I’m comfortable with who I am—especially since they upped my Wellbutrin.” She is looking with great fondness at a miniature pony.

Behind her is her husband who is cooking corn and lobster on the grill. Clearly he works out. There is a big bag of charcoal near the grill which leads us to the obvious conclusion: the pony is next.

Two of Lauren’s grandchildren are wearing fairy princess dresses with wings. We can only hope they are her granddaughters because God help them if they are her grandsons. But that is not what makes them crazy—way over on the right is a kid with a trumpet. (Oh, sorry--he got cut off) Have they lost their minds? You’re giving a six year-old a trumpet? Why don’t you just give him a Howitzer?

The real mystery is the kid in the foreground with the black T-shirt and red devil horns. Is he the bastard son of one of those dudes in the back? Or of the patriarch??! Quelle horreur! Maybe he’s just one of those lonely kids from a neighboring estate whose parents are into Satan worship.

The fairy princess with the knitted Thug Hat is sitting on her mother’s lap. Clearly her mother is looking enviously at the pony’s bangs and thinking, “Oh, crap, I wish I’d had my highlights done.”

And you probably didn’t know this (how could you?) but that same woman always has a child or a dog or someone on her lap when she is being photographed because (I hope you’re sitting down) her hips and thighs are enormous. Seriously. Had all those kids and the weight just shifted. Pretty face—but truth be told, she’s built like a bass. (The musical instrument in front of which she is sitting—not the fish.)

And since I mentioned it—why does anybody but professional burglars and perhaps people who work on boats in freezing cold wear Thug Hats which I believe are also called Watch Caps? The only way they could be more unattractive is if the Thug Hat is way too big and then folds over and you look like one of the Seven Dwarfs. It’s a Fashion Don’t in my book.

In fact, there was no one of color in Vogue. Honestly, I turned up ONE ad in Vogue with a black woman and she was with a white woman advertising Payless shoes! Those are cheap shoes!

So ends the lesson for today.
Posted by Debra Jarvis at 5:22 PM No comments: 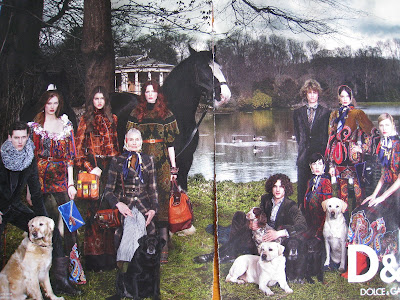 Normally I strive to write something on this blog that is thought provoking, poignant or inspiring. But guess what? I’m on vacation, so the hell with that!

On Labor Day vacation we go to a funky, mildewy (but cheap) set of cabins on the Olympic peninsula. We started going here about 15 years ago because they take dogs.

Every year on this vacation I buy the gigantic hernia busting September issue of Vogue magazine, which after reading it, I use to work out my upper body especially after seeing all those pix of twig-armed models. And I don’t mean they are armed with twigs. But that is an intriguing image . . .

So today we leave behind the world of spirituality, cancer, existential meaning and discuss something really important: fashion!

More pointedly, models posing as Crabby Rich White People. Please look at the above photo and you will see what I mean.

What is wrong with these people?! They are wearing up-to-the minute fashionable clothes, they live in that mansion in the background, they appear to be in good health, and for god’s sake—they have dogs! Eight dogs! Seven Labrador retrievers (one is cut off) and what appears to be a Springer Spaniel.

How could you not be smiling with all those dogs? Especially the Spaniel. Those dogs can be nuts and totally hilarious. See how that guy is holding him with both hands? Probably because the Spaniel was jumping around like he had a chili pepper up his butt. I, myself, have seen Springer Spaniels run around like this and it’s very entertaining.

But do these people looked amused? No. They look angry, serious, snooty, smug and oh-so-bored with life. Maybe the tags on their panties are poking them. Perhaps they picked up a little giardia from drinking that pond water and they’ve got to get to a bathroom!

The grandmother has got the Queen Elizabeth thing going with the plaid coat and the head scarf, but you can tell she was a hottie in her time. She’s thinking, “None of these little bastards are getting my money. I’m leaving it to the Spaniel.”

And there are two horses! Everyone knows horses can be fun! But maybe they’re just visiting and that’s got everyone pouting and thinking, “If we only owned our own horses, then we’d be happy.”

What family is this? I do not think they are from Seattle although there are Canada geese in the pond and God knows we’ve got zillions of them here. Well, I don’t care who they are. I don’t like any of the clothes in this photos except for the fur coats.

And I like the one on the Spaniel the best.
Posted by Debra Jarvis at 7:53 PM 1 comment: