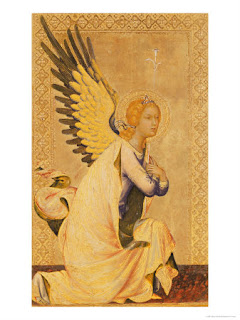 A couple weeks ago a guy comes to my door and says, "Hi, my name is Gabriel."

"Oh, sure," I think to myself. "Next you'll have some Important Message for me."

But that really was his name and it turned out that he was here to take away our woodpile which we had been trying to give away for months. So he was angel!

He took away all the wood, but accidentally left the rails to his truck in our driveway. I called him to let him know. I got his answering machine which said, "Hi, this is Gabriel. Leave me a message and make it a nice day!"

Make it a nice day. Not have a nice day. Take some responsibility for how you receive what life gives you! Make it, don't just take it. I love that.

So he really was an Angel with an Important Message for me.
Posted by Debra Jarvis at 9:17 AM 1 comment: 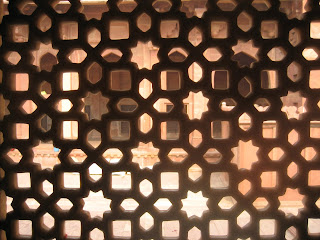 I recently received this e-mail:

I am having a small religious crisis and need some help. I was raised in the Catholic Church. When I got married we had our marriage recognized by the Catholics although my UCC minister friend married us. It was more important to us to be married by someone who knew us than by some random priest.

When we were going through the pre-Cana process the priest had me sign a piece of paper saying that I would raise my children Catholic. I thought that I would probably do that at the time. It was also to satisfy my parents and my husband's mother.

Now I am thinking that I would like the choice to go in a different direction. I might end up with the Catholics but I have some problems with their stance on abortion, gay marriage, well, actually homosexuals in general, in addition to other political things. And I was really turned off by the whole priest sex scandal.

I also have difficulties with the Pope and the Vatican as a whole. I do, however, really sort of love the religion itself. It is the people that bug me.

The Old South Church has made a good home for me over the past few years but I don't know that I am going to stick with the United Church of Christ. I think faith is important and I need to do some exploration.

Is signing a piece of paper really a contract with God?

I totally get your feelings about the Catholic church. In 1984 I was in Rome, staying at a monastery with a Catholic priest friend and I nearly converted. Why? Because I loved the liturgy and how the Catholics really appreciate and the Mystery of it all. And then there was that really cool art. And the incense. And of course the to-die-for vestments! Although I don't care for the Pope's hat. However I like the staff/sceptre accessory.

But like you, there was the issue of all that THEOLOGY that I just couldn't stomach. I realized I could take all the good stuff about Catholicism and use that as a Protestant. So that's why I get how you feel. So I don't think it's the people who bug you--I think it's their theology.

No, you did not sign a contract with God and I think Jesus would be laughing his long-haired bearded head off to hear that a group of folks devoted to Him (the Catholic church) could demand that you raise your child to believe exactly what they believe about Him.

I say wherever your soul feels fed is where you want to be. Wherever you are fed, comforted and challenged. If you feel that way at Old South Church stay there. Go to Mass at Christmas and teach your child an appreciation and acceptance for a different denomination. It will please the relatives as well.

If you say that you feel God is leading you to a different denomination (emphasizing that we are talking about the same FAITH here for Chrissake, excuse the pun), who's going to argue with the Voice of God? And nobody can argue with your feelings--you feel what you feel.

Debra
Posted by Debra Jarvis at 6:43 PM No comments: