Strength For the Journey 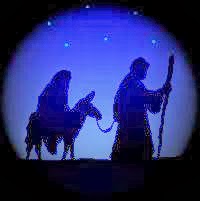 Yesterday a friend of mine was grousing about how bad Christmas is—the expectation that we are all supposed to be merry and happy and jolly.

But true followers of Jesus know that Christmas is not about happiness. It’s about waiting. It’s about a long, hard journey.  It’s about fear and being rejected. And ultimately it’s about finding Light.

If you read the actual Christmas story you know it’s a story about struggle: finding out your fiancée is pregnant (and not by you). It’s about hearing that your son is supposed to bring healing to a broken world (WTF? I just want him to go to college, get married and have kids.). It’s about giving birth in a filthy manger. And it’s about strangers approaching your newborn.

Does any of that sound happy and jolly?

I know, I know, what about the angels? They’re a small part of the story. There’s one at the beginning to say, “Hi, you’re pregnant and God is the father.” And of course Joseph gets one in a dream to say, “Mary is not some slut and you should really marry her.” But that’s it for Joseph and Mary. They don’t get any more angels.

The shepherds get a boatload of angels to give them traveling directions. But that’s it. Those pictures of angels surrounding the manger? I don’t think so. Read the book.

I  really don’t take the Bible literally. The Christmas story is most powerful as a metaphor for a difficult journey at the end of which—impossible though it may seem—we find the Light.

We need Light for our broken lives. For our confusion, our grief, our anger, for all the crap in our lives that makes us say, “It’s just too damn hard.”

Make no mistake: finding the Light isn’t usually happy or jolly or merry. Because sometimes the Light shows us what jerks we’ve been or how we’ve made our own misery.

But as painful as that realization is—what a gift!  Because of the Light we can see a different path. Then we have to make a choice. Choice—another gift!

That means that Christmas happens all year long because we’re constantly embarking on new and difficult journeys.

So let me end by saying, “Strength to you on your Christmas journey and may it be Light.”